Chapter 2: The Very Bad Elf on the Shelf has a Wild Night with Barbie (Pooping on a Cookie Photo Too)

Below is the collection of Bad Elf on the Shelf photos that were taken that caused me to send my elf packing.

Please be sure to read Chapter 1 of the Very Bad Elf on the Shelf story if you'd like to know how we got to this point! 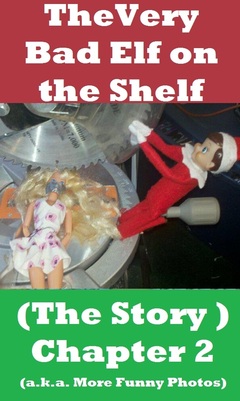 As you know from the previous chapter, my naughty Elf on the Shelf stole my credit card and ordered some Barbies on the internet. When they arrived at my house, I simply tossed them aside so I could take care of them later.

That night, my Elf on the Shelf teamed up with my (cough) Justin Timberlake (cough) doll (please don't tell anyone!). While the Barbies hung out by the Christmas tree, Justin and my elf began to scheme about how to impress the ladies.

Justin: "I have the perfect idea, Buttmunch!" (Yes, my elf's name was Buttmunch.)
Buttmunch: "Does it involve a Saturday Night Live music video skit?"

Both dolls nodded as they had come up with the perfect way to pick up chicks. 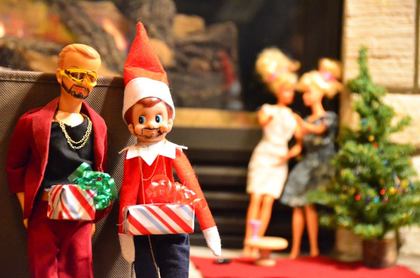 The Barbies are a Bad Influence

Now, I've always read that Barbies can cause poor self-esteem due to their impossible figures, but I had no idea that Barbies could cause trouble or that they were big drinkers.

You see, they taught my not-so-but-kind-of-innocent little Elf on the Shelf the horrible experience of drinking too much... pop. 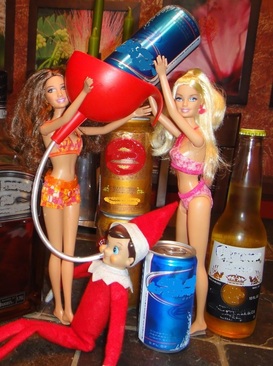 What Happened to My Chocolate Syrup? 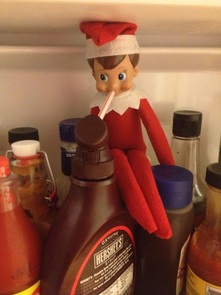 That extra sugar from the chocolate syrup was just enough to make Buttmunch go hog wild! First he had a marshmallow snowball fight with Mr. Potato head and didn't clean up the mess afterwards! 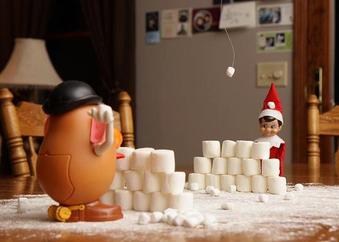 It didn't take long before Buttmunch the Bad Elf on the Shelf had to relieve himself. That's what happens when you drink too much pop. As I watched this part on the surveillance footage, I spit out my ice water in a martini glass all over the computer screen. I should have known better than to think he was being nice by leaving me a nice morning beverage! 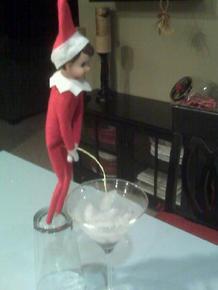 The very next thing that ruined my breakfast happened almost immediately after the ice water spiking incident. You see, I was enjoying a nice peanut butter kiss cookie when I saw that the chocolate syrup the naughty, horrible Elf on the Shelf had drunk earlier had been plunked on top of some fresh peanut butter cookies. Ugh, I can't even hardly say it without wanting to hurl! It is not fun to see your Elf on the Shelf pooping on a cookie that you now have in your mouth. 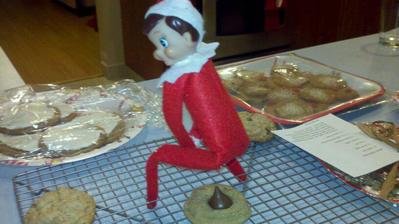 Why Wasn't My Elf on the Shelf Like This? 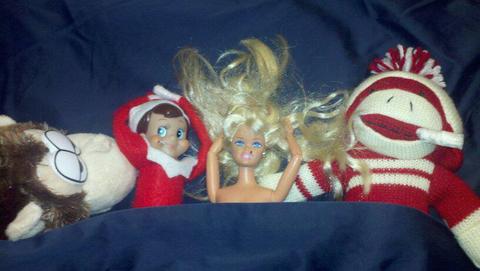 Believe it or not, that was not the end of the fun that night. You see, the bad Elf on the Shelf had way too much to drink (plus way too much chocolate syrup). 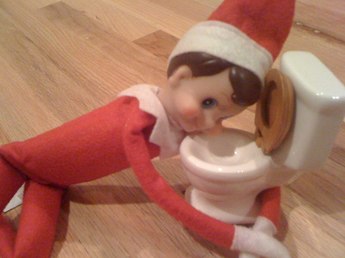 It's Time To Go, Buttmunch!

I actually almost started feeling sorry for Buttmunch when I saw him singing to the porcelain gods. Then I remembered how he had tainted my breakfast and went to confront him. 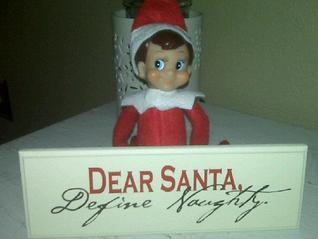 That Innocent Act Won't Work on Me!

There he sat, trying to act all innocent, with that goofy smile on his face, obviously laughing about the Hersey Kiss I'd eaten. I quickly scooped him up and threw him out the front door. I wouldn't have to deal with that doll any more! Getting a lump of coal was much better than having that elf around!

P.S. I never did see the Barbie or any of the other toys after that night. I wonder what happened to them... 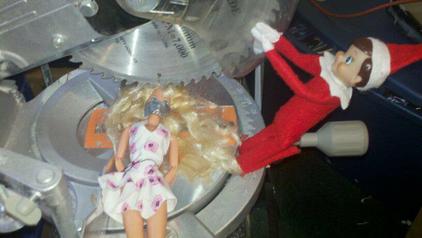